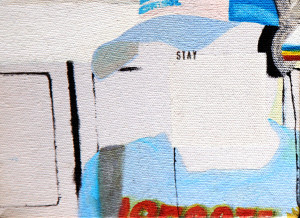 Since 2002, Mendel has experimented with many audiovisual possibilities in different means, having his main interests in video art and documentary cinema. In the last few years, he started working with new media – such as drawings and oil paintings – and running projects with his company BlankTape: organizing online exhibitions, establishing a dialogue with other artists, and reflecting about contemporary production.

Video professor at the British School of Creative Arts, recently launched in Brazil, Mendel initiated in 2016 his first feature film as a director, Família Stronger. In this project, existent also in web doc format, Mendel follows members of political LGBT collectives, from the outskirts of São Paulo, who present themselves as families using surnames and kinship structure.

Curator of the exhibition Reverta – Arte e Sustentabilidade which brought great names of the arts to a public of more than 40 thousand people (OCA – Museum of the City of São Paulo | SP] and in the Brazilian Film Festival Invention & Subversion of the project “Entre Pindorama: Contemporary Brazilian Art and the Adaptation of Anthropophagic Strategies” [Stuttgart, Germany]. His latest work includes a series of videoarts Corpo Presente for Galeria Nicoli, a series of drawings and web-art BROKEN PAGE, and the editing of two yet unreleased short-films: the experimental Maybe Nymph and the mockumentary Turner.

He is responsible for the editing of the documentary film about the musician and composer Itamar Assumpção, in the project “Iconoclássicos” [Itaú Cultural | SP]. Daquele instante em diante entered the circuit in 5 Brazilians state capitals, opened the Indie Festival [BH] and was nominated for the Grande Prêmio do Cinema Brasileiro 2012 [RJ]. From Fernando Pessoa’s manuscripts, Mendel created the animations and video graphics for the film (O Vento Lá Fora), launched at the Rio Festival in 2014 with Cleonice Berardinelli and Maria Bethania. Still within the documentary genre, he edited the short Our World Insideout: Brazil, which made the official selection at the Heartland Film Festival [Indiana, United States], and the TV show for TV Futura Nossa Terra, Nossa Gente – Episode 4, with the main direction by Carlos Nader.

With sampled dialogues from web radios or built in online dictionaries, he developed the animation Right, Wrong or Don’t Know in 2007, presented at the Floating World Animation Festival [Portland, USA] and at the Emma Thomas Gallery [SP]. The music video Mon T-shirt Pue la Fumée de Cigarette, created for the band Laura Palmer [RJ] was all drawn on graph paper, as a representation of digital images. This animation was part of one of the Monochrome Artfanzine [Morelia] DVD editions.

In 2004, Mendel created Por Onde os Olhos Não Passam – Best Videodance at XVII Festival Tápias de Artes Integradas [RJ] – relating the atom and the pixel in order to compose a fragmented individual, through a montage that simulates the flow of media through the internet (streaming). His second videodance, Os Sentidos do Prazer: Movimento #2, reveals scenery created with adhesive tape, to establish the different spaces between the body and the city. Both videos were selected to become a part of the Circuito Videodanza Mercosur collection and added to the DVDS 1993-2005 and 2001-2007, respectively, and distributed in 47 countries.

As an editor, he has worked with the fillmmaker Murilo Salles in the book-DVD Arte Brasileira Contemporânea – Um Prelúdio by critic, professor and researcher Paulo Sérgio Duarte; and in many video-art works by Brígida Baltar, Fabiano Gonper, Lia Chaia, Giorgio Ronna e Matias Aguayo.

His oil paintings are part of the exhibition Causas Naturais [Galeria Mini | BH] and Mendel was invited to one of the editions of Palavras Cruzadas [Oi Futuro – Ipanema | RJ] to create together with Omar Salomão a concert for Leo Cavalcanti, musician. The singer Marina Lima also used one of the videos created during this process in her concerts, and new videos were created for the following seasons of her tour, Maneira de Ser, directed by Marcio Debellian.

In the 2000s, he developed multimedia scenography and video performances for awarded plays, contemporary dance and opera for the directors Jefferson Miranda, Andrea Maciel and Sérgio Britto. Such accomplishments could be seen at important festivals such as the Prague Quadrennial [Praga, Czech Republic], RioCenaContemporânea [RJ], Panorama de Dança [RJ]; and at grand venues like the Municipal Theatre [RJ] and Teatro Castro Alves [BA].

In his apartment in Rio de Janeiro, he began a multidisciplinary group of studies that gave birth to the collective Random, a creative network of architectural, video, and design studies in which he was partner until the second fashion show at the Rio Moda Hype, a branch of Fashion Rio.

In 1998 he began to study Directing for Theatre at ECO-UFRJ, and in 2000 Film at the UNESA-RJ where he was thrice awarded for his work. In order to document feminists he was granted a scholarship by FAPERJ, and worked on Brazilian, American, and Indian productions. Mendel wrote and directed his graduation project, the 35mm short-film Luzia Passou Por Aqui, a simple story told through the eyes of a short sighted leading character. Celebrated for Poetic Expression and Best Profound Film at the University Film Festival [RJ], the film was among the five finalists of the ABC awards – Associação Brasileira de Cinematografia – and Kodak Filmschool Competition – Brasil Phase [RJ].