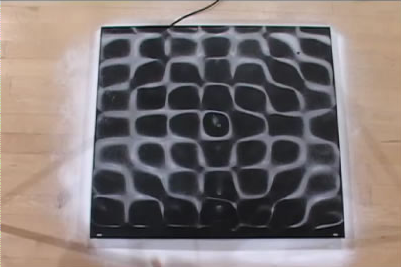 A work in progress by Meara O’Reilly, film by Lisa Foti-Straus. Salt is scattered on a metal plate electronically driven and sung into. Songs are written based on sequences of patterns in the salt.

Chladni patterns were discovered by Robert Hook and Ernst Chladni in the 18th and 19th centuries. They found that when they bowed a piece of glass covered in flour, (using an ordinary violin bow), the powder arranged itself in resonant patterns according to places of stillness and vibration. Today, Chladni plates are often electronically driven by tone generators and used in scientific demonstrations, but with carefully sung notes (and a transducer driving the plate), it is possible to explore the same resonances. I’m currently writing songs based on sequences of patterns.