Words are a feature that song lyrics have in common with poetry. Mendel has tried to convey to these videos the pictorial potential that words carry with them, both in written and in rhythmic form. The vieos do not attempt at a meaning in themselves. Once combined with the other elements in the show, the images are mostly used to lead astray any plot suggested by them and, maybe thus, to build a narrative. The aim was to create a space where the projections could be seen as light sculptures. Projected on transparent acetate, smoke and water, the images temporarily shed their original meanings in order to become abstract reflexes, or to overflow on the walls and ceiling around the audience. The exchange between Mendel and Salomão resulted in a multimedia scenery with a live presentation by Cavalcanti and a band formed for the project, with Marcos Leite Till (Tigre dente de sabre), Filipe Franco (Rafael Franco e os monumentais) and Mariá Portugal (Fernanda Takai).

By the end of an opening vignette with an aerial image and electronic music created by Paulo Mendel, in comes a phrase by Omar Salomão. Soon followed by the band with the music of Leo Cavalcanti.

The manipulation of an image made in Colombia with a cellphone camera seems still, yet insinuates 3D due to small variations betweens frames. Given its urban landscape, we lose the notion of time and that is where the dialogue without actors, written by Mendel and Solomon, unfolds.

At first, it seems like a conversation between two people looking at a city from a far. But soon it blends with comments about the performance itself.

Images of escalators result in distinct images for this scene. The most present image explores the graphics of the stairs in 3 projectors, causing a sort of flickering across the whole stage. A second result is obtained with smoke, creating a pyramid when two projections meet on the floor. Plus, the reflections on the hanging pieces of acetate spread organic forms across the whole theater, insinuating microscopic beings.

Paulo Mendel appropriates himself of a poem by Omar Salomão for an audiovisual performance that manipulates the text and the senses as he writes it. Again, Mendel created the images and the soundtrack.

At the singer’s background, a continuous flow of a sequence shot of a subway train. Despite the uninterrupted movement that insinuates distance being created, by the end of the video, you arrive at an almost identical image as that of the starting point.

Other interferences of moving train projections pulsate to intensify the atmosphere along with the music.

This time Mendel uses a photo taken by Salomão to make a vignette along with his images and soundtrack. The video starts just before the exact moment where two people fall in love.

The flight over the trees is manipulated by Mendel to accompany the rhythm of Cavalcanti’s music. This time the projection is used more like a light in the scene. At the same time, Salomão begins to make abstract drawings with the stylus, cutting the sheets of hanging paper.

[PROJECTION | You don’t know what love is]

Images recorded onto a glacier in Patagonia by Paulo Mendel and the poem by Omar Salomão, are combined with the cover of Don Raye and Gene Paul’s music in Leo Cavalcanti’s voice and guitar version.

Mendel steps in to make sculptures with the sheets of paper that Salomão has cut. Suspended in the air, the sheets resemble the organic shapes reflected throughout the show.

Paulo Mendel performs with projection as Omar Salomão reads the text. He sprays water onto the acetate sheets to enhance the brightness of the images, and towards the public, to delineate the words projected in the air.

Then, it starts to rain on stage for Leo Cavalcanti’s song.

The video was generated in the creative mode of a game which processes an infinite planet, overloading the rendering of images and giving the impression that the landscapes are erased.

In this scene the projection in B&W is simple to enhance the sense of lightness found in this song about letting go after a break up.

Salomão’s poem, adapted into a song by Cavalcanti, wraps up the concert.

Images in B&W from the movie Ballet Mecanique by Fernand Léger are projected onto the acetate sheets. In the background projection, street children playing contrast with the restless flow of the city of São Paulo. 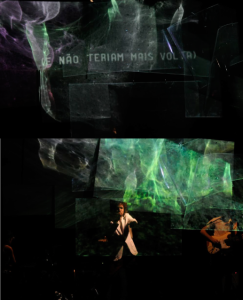