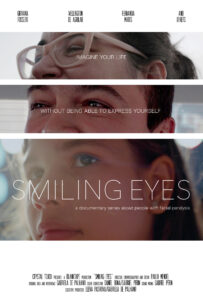 Smiling Eyes is a documentary series about people with long-term facial paralysis. The difficulties of relating to the world around them without the control of such spontaneous and fundamental movements for human communication are treated in a light way in three episodes directed by Paulo Mendel. Each episode tells a story of the physical and emotional transformation of different cases and shows unexpected examples of overcoming difficulties, in addition to those obtained in the long treatment of connecting feelings with facial expressions.

Conceived by Gabriela de Palhano, TV Globo reporter also affected by facial paralysis, the series was conceived and produced in partnership with BlankTape. The episodes take place in Goiânia, São Paulo and Recife. In 2020, filming would begin outside Brazil, but the project was interrupted due to the covid-19 pandemic.